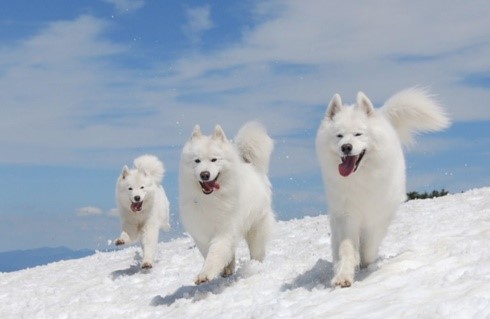 Due to their pure white hair and angelic smile the Samoyed breed of dog has earned the nickname “Smiling Angel”.

These smart, sociable, loyal and intelligent dogs can be mischievous in a fun and playful way. Samoyed dogs personality and characteristics are angelic.

Samoyed’s have so much love to give and like lots of love and attention too.

The Samoyed is descended from the Nenets herding laika, a dog that comes in not only white, but also a wider variety of colors.

The Samoyed’s ancestors, named after the Siberian nomads Samoyed, were born in the Russian Arctic and originated in the 17th century.

The original ancestors were nurtured by the Samoyed nomadic tribes who now settle in the polar region, east of the Ural Mountains，the Sammy’s famous white coat is thick enough to protect against such brutal conditions, for instance, temperatures of minus-60 degrees are common.

The robust and loyal Samoyed was originally used to hunt, herd reindeer, and haul sledges for the Siberian Samoyed people.

They pulled sleds, herded reindeer, hunted game, and protected each other against predators.

Samoyeds love people and enjoy living with them. Due to their emphatic nature with children they often were found to be protecting and looking after them, keeping them warm by lying next to them when climates were cold and ensuring that they were kept safe.

Towards the end of the 19th century, fur merchants began importing Samoyeds to the United States and Europe.

During the early 20th century Arctic expeditions, explorers called upon the help of Samoyeds due to their natural intelligence, characteristics and robustness in challenging climates.

The Samoyed’s ears are often standing erect especially when alert. They are substantial thickness and form a triangle with a rounded edge tip.

The color of the eyes is deep and concave, and the lower eyelids are inclined to the base of the ear.

Samoyed noses are generally black, brown or liver brown. This can alter due to changing climate or with age.

Their lips are generally black in colour, and the corners of the mouth are upturned and teeth are strong with a scissor like bite if and when they need to use them.

Samoyeds have a strong posture with a straight and muscular back.

The feet are large and long, relatively flat, like the feet of a hare, toes being slightly separated.

The toes are usually arched with thick pads underneath and protection on the sides, some even say they can appear cat like.

With pure breeds, the tail is generally relatively long and fluffy which can hang down to the ankle joint.

When alert, the tail raises above the dogs back or sometimes to the direction of interest and when resting it resumes a lowered position.

The Samoyed’s skin color is usually pure white, they can also be light brown, grey or even a cheese color.

The Samoyed’s flamboyant white, fluffy coat is beautiful. To keep it in good condition requires rigorous grooming. Some can require daily grooming. Twice per year the Samoyed is known to lose perhaps even their complete coat of hair so be prepared with your brush and grooming. Even outside of the maximum shedding times it is best to be expectant of daily brushing and vacuuming your home especially daily during shedding seasons.

Maintenance can be hard work. Daily brushing is essential when their coat is shedding; once or twice a week when it’s not.

They also generally like a bath once every two to three months.

Bathing the Samoyed is a time-commitment due to their thick fur. Either let a pet shop do it for you or be prepared to spend some time to wash them properly, rinse out the shampoo and dry it completely using a gently warm but not hot blow dry.

Brush your Samoyed’s teeth at least once a month to remove tartar buildup and the bacteria that can lurk inside.

A good chewable nutritious bone can achieve the same or even better results too.

Nails should generally be trimmed at least once every two months unless they are worn down naturally through walking. This will prevent painful tears and other problems. If you can hear them clicking on the floor, they’re too long.

As with all dogs their nails have blood vessels close to the root. If they are trimmed too far then bleeding can be caused as a result. If this happens it may scare you and also your dog could be less than co-operative next time you take their nails for a trim. It is fine to do it yourself but remember that less removed is better. Personally I let a pet groomer do it but I still always tell the groomer to not cut them too short.

As friendly and smart as this breed is, the Samoyed is challenging to own.

Samoyed’s like to voice their opinions and can be chatty dogs, commenting using bellows, howling and barks within moderation. They like to be kept busy to avoid them indulging in potentially destructive behaviours including gardening, interior decorating, garbage re-organising or household DIY.

Their hunting instincts are always prominent so be aware that they will like to chase other animals given the opportunity even if it’s just to play. They love the chase.

At heart, the Samoyed characteristics are still those of a hunter. He is likely to chase after small animals that he perceives as prey.

For his safety, he should always be leashed when he’s not at home in his fenced yard.

Even a well-trained Samoyed can’t be trusted off leash due to their size and strength.

Training Samoyed is also challenging. This breed is smart, and learns quickly, but you must approach training with the right attitude.

When training Samoyeds the owner must remain patient.

Repeat commands and gestures repeatedly, rewarding them with treats to establish long lasting behavior habits. Try not to be too hasty or demanding.

A Samoyeds’ temperament can be affected by a number of factors, including heredity, training, and socialization.

Puppies with early socializing can quickly develop lovely temperaments are remain curious and playful, willing to approach people and be held by them.

Well-bred and nurtured Samoyeds are intelligent, gentle and loyal dogs.  An amazing addition to any family. They are friendly and affectionate with all people in general including children and they thrive on helping and being part of household activities.

Like every dog, the Samoyed needs early socialization and exposure to many different personalities, surroundings, noises and experiences when they are young. This will help to ensure that your Samoyed grows to be a well-rounded cheerful and sociable dog.

Enrolling your Samoyed in a dog socialization class is a great start whatever age they may be. If you would like more information please contact us.

Gather visitors at your home as often as you can, take them to parks and malls that allow dogs, and embark on as many long relaxing strolls as possible to ensure that they can polish their happy social skills.

Please subscribe to read more of my upcoming posts. 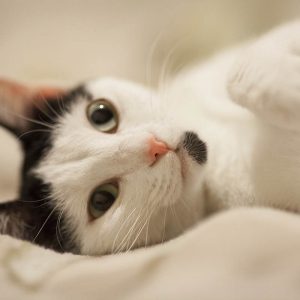